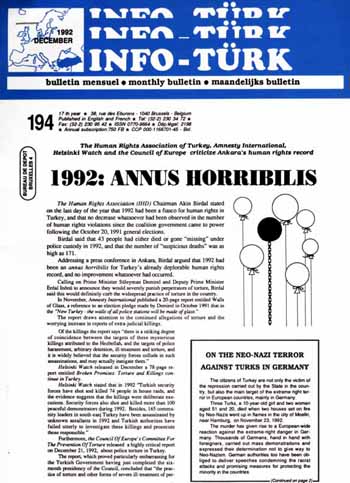 
The Human Rights Association (IHD) Chairman Akin Birdal stated on the last day of the year that 1992 had been a fiasco for human rights in Turkey, and that no decrease whatsoever had been observed in the number of human rights violations since the coalition government came to power following the October 20, 1991 general elections.
Birdal said that 43 people had either died or gone “missing” under police custody in 1992, and that the number of “suspicious deaths” was as high as 171.
Addressing a press conference in Ankara, Birdal argued that 1992 had been an annus horribilis for Turkey’s already deplorable human rights record, and no improvement whatsoever had occurred.
Calling on Prime Minister Süleyman Demirel and Deputy Prime Minister Erdal Inönü to announce they would severely punish perpetrators of torture, Birdal said this would definitely curb the widespread practice of torture in the country.
In November, Amnesty International published a 20-page report entitled Walls of Glass, a reference to an election pledge made by Demirel in October 1991 that in the “New Turkey - the walls of all police stations will be made of glass.”
The report draws attention to the continued allegations of torture and the worrying increase in reports of extra-judicial killings.
Of the killings the report says “there is a striking degree of coincidence between the targets of these mysterious killings attributed to the Hezbollah, and the targets of police harassment, arbitrary detention, ill-treatment and torture, and it is widely believed that the security forces collude in such assassinations, and may actually instigate them.”
Helsinki Watch released in December a 78-page report entitled Broken Promises: Torture and Killings continue in Turkey.
Helsinki Watch stated that in 1992 “Turkish security forces have shot and killed 74 people in house raids, and the evidence suggests that the killings were deliberate executions. Security forces also shot and killed more than 100 peaceful demonstrators during 1992.  Besides, 165 community leaders in south-east Turkey have been assassinated by unknown assailants in 1992 and Turkish authorities have failed utterly to investigate these killings and prosecute those responsible.”
Furthermore, the Council Of Europe's Committee For The Prevention Of Torture released  a highly critical report on December 21, 1992,  about police torture in Turkey.
The report, which proved particularly embarrassing for the Turkish Government having just completed the six-month presidency of the Council, concluded that "the practice of torture and other forms of severe ill-treatment of persons in police custody remains widespread in Turkey and that such methods are applied to both ordinary criminal suspects and persons held under anti-terrorism provisions." (The  extracts of the public statement will be given in the next issue of Info-Türk.)
The main target of the State terrorism in Turkey has been without any doubt the Kurdish militants and intellectuals who demand the recognition of their national rights.     The semi-official Anatolian news agency reported on December 31 that in operations launched by security forces in eastern Turkey, 162 “terrorists” were killed while 150 PKK militants were caught alive. The police arrested 204 locals accused of aiding and abetting PKK activities.
However, these figures are in flagrant contradiction with those given by the security authorities.  The State of Emergency Regional Governor Ünal Erkan said on December 30 that Turkish security forces killed a total of 3,000 “separatists terrorists” in 1992. As 2000 of them were killed in the recent Turkish operation in northern Iraq, the rest had fallen victim to security operations in southeast Turkey.
More precisely, he said a total of 1,650 “terrorists” had either been killed, wounded or captured in southeastern Turkey and that 8,136 suspects had been caught for assisting the PKK.
Erkan added that 3,290 of the suspects had been arrested while the investigations of 4,846 suspects were continuing.
According to the governor, a total of 467 soldiers, 113 village guards and 552 civilian were killed by the “terrorists” in the same period..
To more clearly illustrate the situation, we present below the the practices of human rights violations perpetrated either directly by the State forces or by obscure forces instigated and protected by the State in last three months of 1992..

THREE-MONTH PRESSURE ON THE MEDIA

A new record of fine to the press was registered on December 24 in Turkey by a total sum of 222,250 US Dollars.
Author Edip Polat was sentenced by the Ankara SSC to two years in prison and  a fine of 50 Million TL (6,250 Dollars) for his book titled We Turned The Dawns into Newroz on the grounds that the book was “making separatist propaganda.”
At the same trial, Hikmet Kocak, owner of the Basak Publishing House and publisher of the book, too was fined 1,728,000,000 TL (216,000 Dollars).

Screening of Dutch director Verhoeven’s film Basic Instinct has been banned in Turkey by a series of legal proceedings launched by Ankara and Istanbul public prosecutors.  The judicial actions are based on a report given by the notorious Censorship Board which directly depends on the Prime Minister’s cabinet.
Soon after the first screening of the film in Turkey, a group of Welfare Party (RP) deputies, Islamic fundamentalists, had filed a complaint against Basic Instinct at the Ankara public prosecutor’s office, claiming that it would produce corrupting effects on Turkish society and should therefore be banned. Thereupon, the Censorship Board delivered a report in this sense, and it was followed by public prosecutors.
Ankara Prosecutor Hayri Tayhan said on December 23 that the movie owners who screen the film will be given a fine of at least TL 20 million. If they fail to pay the fine, the amount may be increased to TL 50 million with a court decision. Those who fail to pay that amount may be given a prison sentence, according to the prosecutor.

THE ARMY ASKED SUIT AGAINST TV

The Chief of General Staff of the Turkish Armed Forces, General Dogan Güres asked, on November 19, the Ministry of Justice to launch a legal proceeding against journalist Mehmet Ali Birand for an interview that he had made with Kurdish Guerrilla Chief Osman Öcalan, the brother of the PKK leader Abdullah Öcalan, broadcasted on November 16 by a private TV.
At this interview, Öcalan refuted the Turkish Army's claims as regards PKK losses during the last anti-PKK Operation in Iraq.
Güres saying “They did not meet him or interview him. The film was prepared with cuts from earlier appearances,” complained that the program gave the impression that the PKK did not suffer any losses during the recent Turkish military operation against the PKK camps in northern Iraq.
However, just after this intervention, Birant presented to the press the originals of the films shot by his TV-team at the interview with Osman Öcalan and proved that General Güres was misled by his intelligence services.

A German free-lance journalist, Stefan Waldberg, was taken into custody on October 21 at Habur border gate as entering Turkey after a 25-day mission in Iraq. The custom authorities claimed that he was trying to introduce to Turkey some propaganda material in favour of the PKK.
After his one-week interrogation at Silopi, Waldberg was placed under arrest on October 29 for being tried at the Diyarbakir SSC.
The court began to hear the case filed against Waldberg on December 4.  Accused of acting as a courier for the PKK and facing a prison term of up to five years, Waldberg refused the accusation and said: “I have come to Turkey to do general research and broadcast it on Radio Dreyeckland. I do not know PKK people in Germany.  In Northern Iraq, my purpose was to search whether the aid given by various organizations are used on the spot or not.”

Although the Turkish Parliament adopted seven ILO agreements on November 25, one of the agreements, Article 158 was vetoed by President Turgut Özal on grounds that Turkish businessmen could not afford it. The 158th Article of the ILO regulates employees rights regarding the termination of their employment contracts, and guarantees their right to apply to courts.
Labour Minister Mehmet Mogultay denounced the veto as an action “against the will of the nation.”, while the Turkish Employer Unions Confederation (TISK) welcomed it.

ON THE NEO-NAZI TERROR AGAINST TURKS

The citizens of Turkey are not only the victim of the repression carried out by the State in the country, but also the main target of the extreme right terror in European countries, mainly in Germany.
Three Turks, a 10-year-old girl and two women aged 51 and 20, died when two houses set on fire by Neo-Nazis went up in flames in the city of Moelln, near Hamburg,  on November 23, 1992.
The murder has given rise to a European-wide reaction against the extreme-right danger in Germany. Thousands of Germans, hand in hand with foreigners, carried out mass demonstrations and expressed their determination not to give way to Neo-Nazism. German authorities too have been obliged to deliver speeches condemning the racist attacks and promising measures for protecting the minority in the countries.
In fact, the extreme-right attacks on foreigners or their houses, shops and mosques in Germany as well as in other European countries such as France, Belgium, Holland, Austria, Switzerland had started ten years ago. But no serious measure has been taken up to this recent murder for stopping the rise of the racist and xenophobe acts. Only this year, right-wing extremists in Germany have carried out 1,900 attacks on foreigners, during which 17 people have been killed and 452 injured.
In a written message on a wreath laid at the German Embassy in Ankara after the incident,  Turkish journalists recalled another racist attack on a Turkish family in December 1988, during which four people, including one German, were killed, and said: “If the German authorities had not remained silent then, Vahide Arslan, Yeliz Arslan and Ayse Yilmaz [the three victims who died in the attack] would still be alive today.”
In the daily Sabah of November 25, Mehmet Altan said: “The German Neo-Nazi movement seems rather like a state-supported scare campaign to accelerate forcefully the return home of two million Turks. The failure to apprehend members of the Neo-Nazi gangs, the way those apprehended are released so quickly, the claims that these gangs include certain government officials and the failure to isolate these groups despite high technology, all raise certain doubts. It looks as if the Germans have staged a dirty play to oblige the Turkish population in the country to leave.”
As the anti-racist protests and demonstrations were growing,  Turkish authorities and nationalist circles have done their best in order to present the incident as a fresh proof of their claim that Turkish nation is threatened everywhere by enemies. While all other ethnic minorities, including  the Kurds and Anatolian Christians who constitute a third of the Turkish population in Europe, too were exposed to Neo-Nazi attacks, the anti-racist demonstrations after the Moelln drama were echoed by the Turkish media as a gesture of excuse towards the Turkish nation only.
What is more, Turkish authorities attempted to exploit this event for discrediting the European criticism towards the violation of human rights in Turkey. For example, Turkish Premier Demirel said: “Those who make the sparks fly and protest every small incident in Turkey, should look at themselves first.”
And a few days later, on its December 17 issue, the Turkish Daily News reported the following:
“In areas such as Antalya, Alanya, Bodrum and Izmir [in Western Turkey], winter construction work depends almost completely on labor of Kurdish origin.  Two weeks ago, tens of Kurdish origin citizens boarded passenger busses and abandoned Antalya in fear of a Turkish attack against them. In Alanya, Side and Antalya, house owners now refuse point to blank to rent flats or homes to people from the southeast. At least 3,000 Kurdish origin people living there faced the threat of starvation because shop owners are refusing to sell goods and their bosses are refusing to employ them any longer.”
It is under the influence of this atmosphere of xenophobia and racism reigning in their own country that, during the anti-Nazi demonstrations in Germany,  some groups marching under Turkish flags attacked Kurdish immigrants.