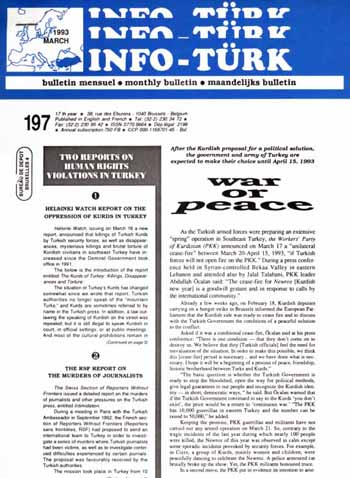 After the Kurdish proposal for a political solution, the government and army of Turkey are expected to make their choice until April 25, 1993 WAR OR PEACE?

HELSINKI WATCH REPORT ON THE OPPRESSION OF KURDS IN TURKEY

THE ASSASSINATION OF 14th JOURNALIST IN ONE YEAR

Kemal Kilic, 28, former reporter for the defunct daily newspaper Özgür Gündem and Urfa IHD official, was killed by a group of unidentified assailants on the Urfa-Akcakale highway on February 18. His colleagues report that he had demanded authorization to carry a fire-arm for protecting himself, but the authorities refused it. With the assassination of Kilic, the number of the journalists killed within a year reached 14.

The State Council endorsed on February 24 an earlier court decision which rejected the poet Nazim Hikmet’s application to have his Turkish nationality returned.
Hikmet is Turkey’s most renown poet whose works have been printed in different languages throughout the world. After having served 13-year prison for his political beliefs, he fled Turkey in 1951 when he was appealed to make his military service at the age of 46. He died in Moscow in 1963.
The late poet’s sister Samiye Yaltirim put in application to the prime minister’s office back in 1988, for the Cabinet to overrule a 1951 decision to have the poet stripped of his Turkish nationality. She received no response.
Yaltirim took this to mean an “indirect rejection” of her application, which prompted her to open a law suit to have her brother’s nationality restored.
The court decided that Yaltirim had no “direct interest” in the issue and ruled that she had no “licence” to file a law suit.
The court ruled that “the right to nationality is an individual and personal right. A sister has no interest in the matter.” This was endorsed by the State Council.

The prosecutor of the Ankara SSC demanded on February 8 that sociologist and writer Ismail Besikci be fined TL 26 billion ($2,888,888) for his 13 books on the Kurdish problem. The demand for the proposed fine, if upheld,will be the largest ever imposed on published material in Turkey. All of these books had been confiscated by the authorities
Besikci told the daily Cumhuriyet that Turkey is far from being a democratic country, despite its claims that it has established a “Western-style” democracy.
“As the number of such cases increases, the state is dragging itself towards a dead end. These trials and indictments are proof as to why we don’t trust the judicial system in Turkey.”
Meanwhile, Ünsal Öztürk, the publisher of Besikci’s book and owner of the Yurt Publishing House, said: “We don’t want to be tried by the Turkish courts. These courts do not even abide by the international agreements signed by the state. When the SSC makes its final decision, we will use our right to apply to the European Human Rights Commission.”

PRESSURE ON THE MEDIA IN FEBRUARY

THE RSF REPORT ON THE MURDERS OF JOURNALISTS

Just before this new assassination, the Swiss Section of Reporters Without Frontiers issued a detailed report on the murders of journalists and other pressures on the Turkish press, entitled Intimidation.
During a meeting in Paris with the Turkish Ambassador in September 1992, the French section of Reporters Without Frontiers (Reporters sans frontières, RSF) had proposed to send an international team to Turkey in order to investigate a series of murders where Turkish journalists had been victims, as well as to investigate continued difficulties experienced by certain journals. The proposal was favourably received by the Turkish authorities.
The mission took place in Turkey from 10 January to 21 January 1993. The team conducted 22 formal meetings organized on its own initiative or on the initiative of the authorities: 6 with professional press organizations, 8 with journals and journalists, 4 with lawyers and human rights defenders, and 4 with government representatives. Beyond that, the team had several informal meetings, listened to spontaneous witnesses and collected extensive documentation.
The team regrets not to have been able to meet in Diyarbakir, in spite of a request submitted more than one month in advance, the authorities in charge of the State of Emergency. The reason given was the visit of a government official in the region. The team believes, however, that it has been able to collect sufficient information .
The following is the summary of the 65-page report:
1. Having been able to confirm that they had been the authors of articles published by the press, and in the absence of any evidence of violent activity, we believe the 13 murdered individuals should be considered as journalists.
2. It remained so determine if they had been killed due to their activities as journalists, and who could have been the perpetrators of these murders. In the absence of irrefutable evidence, it is not possible to give answers devoid of any doubt. This counts as well for the two cases where the two suspects, members of Hezbollah, were arrested by the Police (pending a Judgement, the details of the case have not been communicated to us).
3. However, we believe that in certain cases we have sufficient elements to support very strong suspicions. They include the following:
•  At least two journalists were killed by the PKK, the separatist Kurdish party pursuing its aims by armed means. One of the two had been accused of being a police informant; the motive of the murder accordingly does not appear to be tied to his (former) journalistic activity. The other was killed during an attack on his town; he may have been killed due to his profession.
• At least four journalists were killed due to their journalistic activities in cases which directly, or indirectly, implicated the Police. The identities of the murderers remain the object of diverse hypotheses: the Counter-Guerrillas, Hezbollah, paramilitary groups. But we are convinced that there was at least the complicity, if not the participation, of the Armed Forces.
• In the seven other cases, there are elements based on the testimony of witnesses which could support certain suspicions. But, the team feels they are insufficient as such to support any conclusion.
4. However the delegation believes its suspicions concerning members of the Police are reinforced by numerous examples and accounts of other pressures experienced by journalists and publications in the region: obstacles to free movement, physical intimidation, threats, burned trucks and kiosques...etc.
We have been particularly alarmed by he recent murders of three press vendors and distributors, all threatened before to cease selling certain publications. One vendor was attacked during the course of our mission, and his relatives and friends told us directly of previous threats originating from a Police Officer.
5. The deaths of these journalists take place in a context of growing violence toward the civilian population. Hundreds of individuals from the Kurdish civilian population have been assassinated in a similar fashion — by mysterious killers who are never found. The authorities blame "terrorism" and retribution killings among terrorist groups. This exclusive blame does not convince us, if only because we have observed on several occasions the refusal of the Turkish authorities to investigate any case, no matter what it be, where the Police may be implicated.
6. We confirm, and praise, the considerable freedom of expression enjoyed by the major papers. In addition, we noted that many publications abundantly give the point of view of the PKK. This is the paradox of a country which allows the publication of journals very close to organizations considered terrorist, but which subjects these same publications to constant judicial harassment, and notably frequent sequesters. The procedure is legal, but is based on laws which abusively limit freedom of expression. There still exists a large arsenal of repressive laws: 152 of their articles can be used against the press.
7. We note with satisfaction the reform foreseen for the Law on the Press; but we judge it to be very insufficient. We believe in particular that Articles 6 and 8 of the Antiterror Law, which allows vague punishment for any type of separatist propaganda, should be repealed.
The daily Cumhuriyet published at the end of January a list of journalists killed since the existence of the Turkish press. The total number is 34. Thirteen of them, i.e., more than one third, were killed in 1992.
1891: Zeki Bey
1909: Hasan Fehmi Bey
1910: Ahmet Samim, Huseyin Hilmi Bey
1919: Osman Nevres
1920: Hasan Tahsin
1930: Hikmet Sevket
1974: Adem Yavuz
1978: Ali Ihsan Özgür
1979: Abdi Ipekçi, Ilhan Darendelioglu
1980: Ismail Gerçek, Ümit Kaftancioglu, Muzaffer Fevzioglu, Recai Ünal
1988: Mevlut Isik
1989: Sami Basaran, Kamil Basaran
1990: Çetin Emeç, Turan Dursun
1992: Halit Güngen, Cengiz Altun, Izzet Kezer, Bülent Ülkü, Mecit Akgün, Hafiz Akdemir, Çetin Ababay, Yahya Orhan, Hüseyin Deniz, Musa Anter, Yusuf Aktay, Hatip Kapçak, Namik Taranci
1993 (January): Ugur Mumcu
The report gives the details on  the 13 murders reported and confirmed in the course of 1992, along with an evaluation in response to the following question:

Why they should all be considered journalists?